I’m trying to clean up the Mt Barney section of Aussie Bushwalking. It’s tough because there are 15 million routes up the mountain and people tend to pick and choose between them.

So for a start I’ve moved it into its own region “Mt Barney Summit” within the Mt Barney National Park region. I’m thinking perhaps adopting a naming structure to keep things clean:

I’ve also made sure every walk is marked as Very Hard and made a big warning about difficulty on the region page. Perhaps a standardised warning to go at the top of every Mt Barney walk since it’s notorious for underprepared hikers.

Sounds like a great idea Richard, I would love to see more info on specific routes, I had no idea there was so many.

120 views, how about some comments! More input = better information for everyone.

Great idea. I made the east summit in 1992 on the “peasants” ridge but my last 2 hikes up there proved that the way up is far more confusing than that first time. I failed the next time ( July 2018) basically because I went up the wrong way at the start and ran out of time to get back in the daylight.
The second time ( October 2018) the track from “rum jungle” to the summit was far from clear and there were many “false” trails leading to dead ends and not very safe scrambling.

I’ve only done My Barney once (and being over 60, that might be it). I was prepared in some ways but not others.
Ways I was unprepared: being unfit (needing a walking pole, which I didn’t have, to descend, I was in so much pain), underestimating how cold it could get at the top (take a light weight vest at least, which I borrowed), not having a light.
Ways I was prepared: having a good navigation app with the major tracks routed. It is easy to go off the track on false tracks and this saved us especially in the dark. Going with a tall strong man with a rope. The rope helped a couple of times. Battery pack to keep the phone well charged.
We also started 2 hours too late and spent the last 2 and a half hours in the dark (below the worst of it by then). We went up the SE ridge and down Peasants. Peasants had a couple of trail markers but many false trails, we found 5 of them.
I’d been told about this mountain by a young guy at work who’d climbed it and camped on it a few times. His description of Peasants ridge was that you could push a shopping trolley down it. He had helped with us not getting lost but not with how difficult it could be. So reading everyone’s stories before hand rather than afterwards, would have been a good idea.
Live and learn.

Some good advice here Nichola, especially taking a battery pack if you are using a phone app for navigation, a single charge wouldn’t last a full day if you are tracking and recording the walk. I also agree that you need to be prepared physically and not underestimate the climb. I had to descend once after tearing a calf muscle and a meniscus and it wasn’t a pleasant experience.

The mountain would have severe fire devastation now. Don’t know what it is like to attempt the climb in Summer anyway. Presumably lots of reptiles! 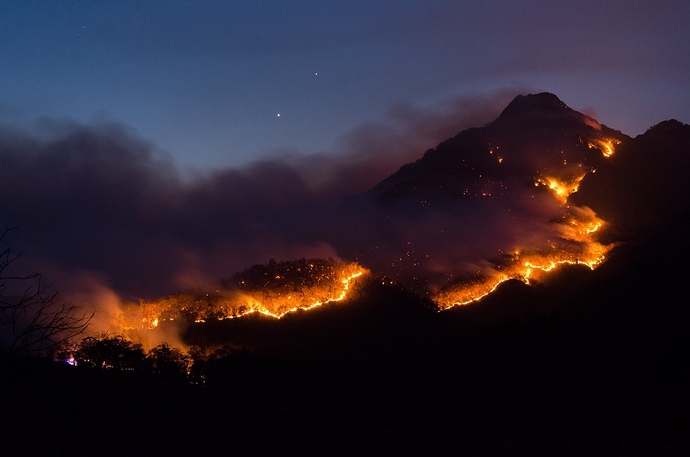 Yes, it will be interesting to see how much of Barney NP gets burnt. From what I can see on the Sentinel data pretty most of Mt Barney itself has fires now but I’m not sure how accurate that is.